The Calamba City region is a powerful economic engine, serving as an agricultural and manufacturing hub, along with boasting a vibrant service sector and an emerging tourism industry. As the economic center of Calabarzon region, Calamba City is home to just under 400,000 inhabitants, according to 2015 government figures.

Served by a modern and well managed infrastructure system, there are 6 modern hospitals and 111 health clinics covering the city and suburbs. Locals and visitors are attracted by an unspoilt and beautiful coast line, as well as the Philippines largest freshwater lake, Laguna de Bay. Here, residents of Vermont Place can enjoy the views over the water and enjoy the cool breeze coming from across the bay while spending time with family and loved ones.

Calamba boasts a unique history dating ack to the 1700s while a government decree officially made it a city in 2001. Twin cities include Wilhemsfeld in Germany, Litomerice in the Czech Republic, Walnut City in California and two cities in South Korea; Guri and Geumcheon-gu.

The Calamba City area is growing rapidly as it becomes the key economic hub of the Calabarzon region. As a result, Ovialand Corporation’s developments are appreciating at a faster pace than most others in the area. Many major banks, financial services firms, manufacturers and distributors continue to move to Calamba City, along with top BPO hubs, outsourcing firms and call centers.

In addition, more than a dozen industrial parks call Calamba City home, with more flocking to the area. Meanwhile, residents of nearby cities and towns are coming to Calamba City for business, and to work and shopping. So this is the right time to invest in a property in Vermont Place, whether for your own home or as a rental or investment property. Rental yield is expected to be high from professionals and young families who are looking for suitable housing as they pursue their careers and raise their children in this region where economic growth is booming.

With Calamba City rapidly becoming a major tourist destination, some of the many attractions in the area include:

Centered on a dormant volcano at the summit of the 1,090 meter Mount Makiling, the reserve was declared an ASEAN Heritage Park in 2013. This 4,244 hectares of unspoiled mountainous habitat lies just south of Calamba City and only 65 kilometers from Metro Manila. Makiling is great for family outings and offers many kilometers of hiking trails, a cultural center and camping.

If you're looking for fun and adventure for the whole family, Republic Wakeboard Park is within easy reach of downtown Calamba City. Geared toward all levels of experience, from beginners to experts, you can spend a fun filled day, weekend or longer at this man-made lake featuring a wide variety of accommodations and amenities.

On the southern reaches of Calamba City, not far off the National Highway, you'll find this amazing bird breeding center. Featuring stunning cameo peacocks, pure white geese, ducks and other fowl living at the farm, it's a great day out for the youngsters.

The most famous attraction in Calamba City is the birthplace of  the Philippines' national hero, Jose Rizal. An average of 270,000 tourists visit this shrine annually. Although the original home was destroyed during World War II, it occupies the same area and is made of the same materials as the original house.

Vermont Place is ideally situated in lush greenery yet within a only few kilometres from the heart of the city, such as Makati CBD, Ortigas Center, Bonifacio Global City. Shopping malls, hotels and other entertainment facilities are also conveniently located nearby. All your healthcare needs are taken care of, with the selection of hospitals and clinics only within a couple of kilometers away from Vermont Place. Families with young children have an array of schools to pick from. 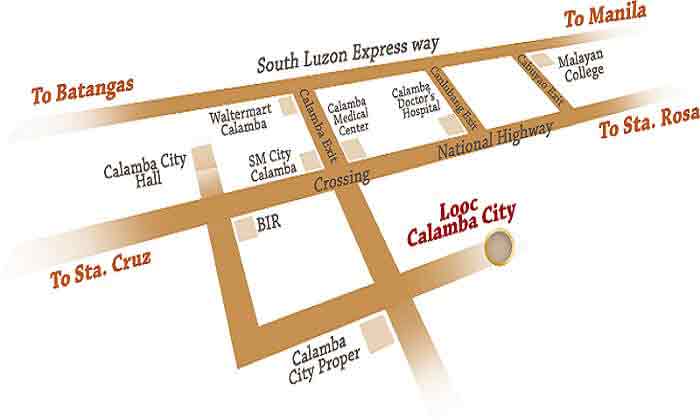